Tony Churnside | Creative Technologist
I’ve seen a few tweets about a television advert that’s been broadcast recently. The advert claims to have a soundtrack designed for dogs, not humans. I thought I’d take a closer look at this claim.

Advert for dogs
First some facts. The average range of a dog’s hearing is 40Hz to 60kHz, this is much wider compared to a human’s which is 20Hz to 20kHz. These figures are pretty rough (or should I say ruff) and vary from human to human (and dog to dog). Hearing loss at high frequency is a normal part of getting old and can begin in people as young as 25 years old. Well, you might think, then it’s easy to create a TV advert that dogs can hear and humans can’t. You’d be wrong. The biggest problem you’ll face is inherent in the design of the whole audio broadcasting chain: it’s currently not designed for dogs. So everything from the microphones used to record the advert right through to the speakers in your living room has been designed for the human hearing range. Building transducers that can create or capture sounds above 20kHz is rare and specialist. This is before I even mention the processing done to the audio to get it to your TV. Broadcasting audio above 20kHz is wasteful and most coders drop frequencies of that order. For example, if you understand sampling theory you’ll know that CDs (with a sample frequency of 44.1KHz) have a Nyquist frequency of 22.05kHz. This means the frequencies which can be represented by linear PCM audio are below 20kHz. Audio carried in a DVB-T multiplex has been through lossy compression which is designed to remove the bits of the audio that humans can’t hear. While these lossy compression schemes are thoroughly tested, they are not yet tested on dogs. Given this information the range of audio that is broadcast and perceivable by dogs but not perceivable by (the majority) of humans is now much narrower that you might have thought, roughly 17 to 20kHz. That’s not much to play with. A quote from the first story I read about this advert claims: “Vet Zara Boland says the sounds are between 18,000 and 20,000 kilohertz, and denies using dogs in an unfair way to publicise a product.” 18,000 to 20,000 kilohertz? KILOHERTZ?! That’s a lot of kilohertz. Far more kilohertz than can be heard. Even by a dog. Let’s assume that this is a typo, and what they meant to type was 18 to 20 kilohertz. (or 18,000 to 20,000 hertz). My hearing can’t get quite that high anymore, so I thought I’d use a computer to help examine the advert. This is what the sound of the advert looks like:

Advert waveform
When I performed a spectrum analysis of the audio it looks like this: 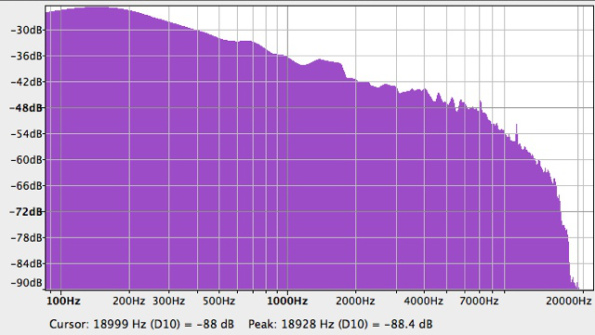 Advert spectrum
I even slowed down the file to see if I could hear anything (by lowering the frequency and bringing it into a frequency range I can perceive). So there is something up there in the 19kHz range, but it’s actually very quiet compared to the rest of the audio and could easily be masked. And remember this analysis is of a recording of the transmission and doesn’t consider how your sound system might effect the audio. If you have a fancy flat screen TV, but use its built in speakers the chances are the audio spectrum that comes out of them has been further compromised. Here’s a picture of the spectrum coming out of my flat screen TV’s internal speakers during the dog advert (according to a simple iPhone app). 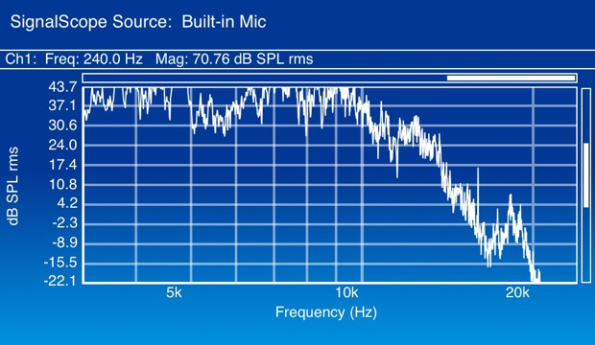 Signalscope Screenshot
Whether or not any of this would trigger a reaction from your dog is down to highly scientific studies like the one described here. I’m not a dog psychologist (and feel free to correct me about the following if you are) but my guess is it would take more than the presence of 19kHz audio to provoke a serious reaction, unless it was very loud, in which case it would be likely to cause a similar reaction in human audiences (those under 25 years old, anyway). Working with the constraints of broadcast-able content I think it would be much easier to attract the attention of dogs using audio that humans AND dogs can hear, at least until the arrival of smell-o-vision, but that doesn’t get headlines. So in conclusion, this is much more about getting free press coverage than entertaining dogs, and it worked perfectly.